#121  by sturmovikul
Mon Apr 30, 2018 9:31 pm
This post will mark the beginning of a series of posts in which I will try to explain the basics of the crypto world and particularly of WebDollar. I will start with the basics of any new language, the words used:

webdollar.IO= maybe you have wondered what the IO extension is in the website address is-> .io is assigned to the British Indian Ocean Territory, the same way .ro is for Romania;

Crypto-Coin = I have a funny explanation for this one, if lets say the dollar ( $ ) and a company share (lets say Apple) met and had a baby it will be a crypto coin. This is because a crypto coin can be seen from 2 perspectives: it can be seen as an investment, for example you have 1 WebDollar today that is worth 1$ lets say and the next day the same 1 WebDollar will be worth 2$ - but at the same time you can use 1 WebDollar to buy real items if the shop accepts crypto as a means of payment;

WebDollar Wallet= the WebDollar wallet is kind of a real wallet, the difference is that you store WebDollars in it instead of paper money + the fact that it has the features of a bank built in it – transactions and security ( you can further encrypt wallet with a 12 word password) – more details here: viewforum.php?f=22;

Wallet Address= you can see this as the IBAN in your bank account, it is a series of characters, numbers and letters which compose your unique identity in the network – the webdollars that you mine are stored in a address. You can have multiple addresses in a single wallet, more on that here: viewforum.php?f=22;

Block= the basic compomenent of any crypto-coin network -> which is composed of many blocks. A block is "mined" by a user and is placed in the same place with other blocks in the same way as a tetris game works. Only one piece of the "tetris" fits perfectly in the "game" - in our case the person that finds the perfect piece first is the one that is rewarded the VALUE of the block. Figure 1 - represented by the dark squares;

Block Value= in the case of WebDollar the value of each block "mined" is 6.000. This means that if you are successful and mine a block you will receive 6.000 in your WALLET. There are a total of 7.000.000 blocks available for mining – at the moment I wrote this(30.04.2018) the last mined block was 8,868 – as time passes there is a complex algoritm that will increase the difficulty of the mining process, thus making reaching the 7.000.000 a task that requires tens of years. The reason for this is ensuring that the coin will not be all available in a short period of time making it kind of worthelss due to the fact that anything that is easy to produce or find has a low value in general – I will cover the laws of supply and demand and how it affects the price of a coin in a different topic later on. ; The Network = is composed of all the people who mine either in their Browser (Chrome, Opera or Firefox) or who mine in a terminal(I will cover this term next);

Terminal or Terminal Mining= if you ever played this game: 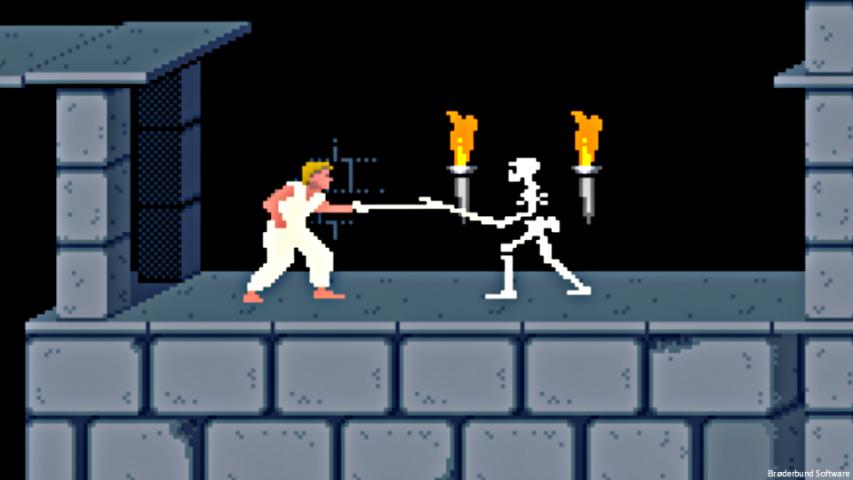 then you proably already know what a terminal is. To put it in an easy way – before computers evolved to have a Graphical User Interface ( more on that here: https://en.wikipedia.org/wiki/Graphical_user_interface) most of them worked in „terminal” or in system in which you use just your keyboard to give commands to the computer without seeing anything graphical just lines of code. 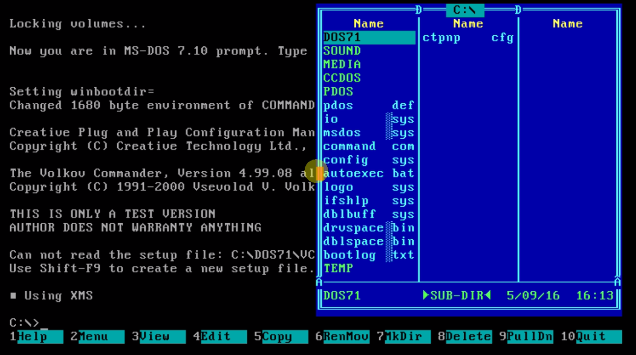 You probably are asking yourself why we are still using this in the year 2018, well the answer to that is simple and it lies in its simplicity – a simpler a thing is the more efficient it is(with regard to resource consumption) thus leading to more efficient crypto mining;
** you can find a guide on how to mine webdollar in „terminal” here: http://webdollar.aji.ro/webdollar-minin ... -terminal/

Block-Chain= as the names says, it is a CHAIN of BLOCKS or a succession of blocks that compose the network - Figure 1. In order for a block to be part of the the blockchain it has to be confirmed by the network;

Fork= So, what happens if you mine a block and it is not confirmed by the network? This fenomena is called that you mined in a fork and it occurs when two miners find a valid block within a short space of time and in WebDollar’s case is that anoying thing when you see the caaaassssshhh in the wallet and then after a while it disappears . For example lets say that we are all mining on block number 100 (the last block of the chain(or tetris) was block 99) – 3 of us solved it in roughly the same time with diffferences of 0.00001 seconds – the first one to get it in line for confirmation will get in validated by the network( I will cover network validation next) – the person who does that has his name on block 100 – like when the Americans went to the moon and planted the flag there so that everybody knew that they were there first. Getting your name on the block means that you get the 6.000 reward for it. Sadly the other who tried to validate it will get a negaive answer and their block will be of no value – purple blocks in Figure 1

Pool = at least once a day on any topic related to WebDollar you will read something about the infamous ‘POOL’ , to better understand what a pool is in the case of crypto, you should imagine it as a normal pool filled with a lot of balls of different sizes each representing a miner. The more balls a POOL has the bigger it will get, so the obvious question is why would we want to have a large number of miners in the same place? As you probably noticed while mining WebDollar besides being lucky, hash rate (hash/s – as displayed in the WebDollar.io page) also plays a very important part in getting those lovely blocks. 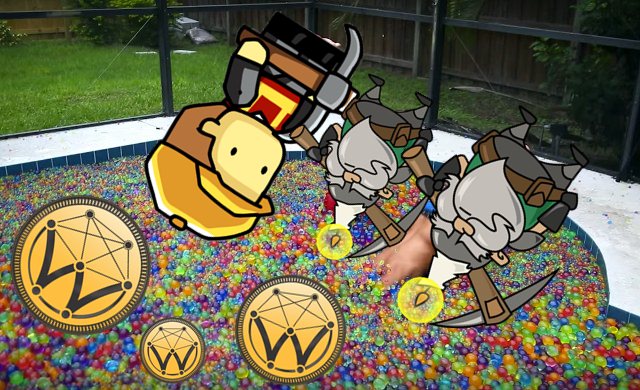 So, why join a pool? When mining in a pool with other miners, the hashing power of all the miners is concetrated on the same block and thus the proability of mining a block is very high, just imagine mining WebDollar with a 1.000.000 hash rate – how many blocks do you think you will get a day? Yeah...a lot...
Ok, pool master, what is the catch? Well, since mining in a pool is a joint effort the reward is also split between all the miners in that pool(more on that in the example) + the POOL OWNER will set up a comission for himself – understandable since he is using one of his devices as the POOL itself which connects all the miners.

Advantages:
+constant amount of mined WEBD;
+you can calculate your actual ROI (return on investment - https://www.investopedia.com/terms/r/re ... stment.asp) – because you will have a daily aproximation of the quantity of WEBD that you will mine;
+less stress and uncertainty;

Disadvantages:
-mining in a pool is not 100% guaranteed, if the pool is to small you will still have a low chance of getting a block in your pool;
-on the oposite side, having big pools will make solo mining ineficient – due to the large hashing power of the pool, you will have minimal chances of catching a block and this can lead to centralization;
-you will not have the joy o seeing +6000 WEBD in your wallet when you mine a block, but instead you will receive portions of the mined block according to your contribution to the pool – as explained in the above example;
-the pool owner is free to set his commision %, it can range from 1% to 99% - but a pool with a high commision will not attract a lot of miners - so a number between 1% an 10% is usally used.

Hash Power= The rate at which a given piece of hardware can mine a coin (mining is the cracking of cryptographic codes). It is like horsepower but refers to how fast hardware can decrypt hashes;
in the moment that the coin will be released;

ICO=Initial Coin Offering - this is essentially crowdfunding for a new project, contributors will receive crypto coins

Exchange= websites were you can buy/sell crypto-currencies;

Whale=somone who owns a large quantity of a certain crypto-coin;

Bullish = trading with the expectations that the price is going to increase;

Bearish = trading with the expectations that the price will decrease;

ATH = all time high - the highest market value that a coin has achieved;

Market Value of a coin = the average value at which a coin is beeing traded across different platforms;

Market Cap = the total number of coins available * the market value of a coin;

FOMO= Fear Of Missing Out. The overwhelming sensation that you need to get on the train when the price of something starts to skyrocket;

FUD= Fear, Uncertainty, and Doubt. Baseless negativity spread intentionally by someone that wants the price of something to drop.

Altcoin=Generally any crypto-currency other than Bitcoin or Ethereum;

Pump & Dump = The recurring cycle of an altcoin getting a ton of attention, leading to a fast price increase, and then of course followed by a huge crash;

ROI=Return on Investment. The percentage of how much money has been made compared to an initial investment;

cold storage= The process of moving crypto-currency ‘offline’, as a way of safekeeping your crypto-currency from hacking. There are a variety of ways to do this, but some methods most commonly used:
—Printing out the QR code of a software wallet and storing it somewhere safe, such as a safety deposit box.
—Moving the files of a software wallet onto a USB drive and storing it somewhere safe.
—Using a hardware wallet.

Hold = or HODL - to hold a coin in your portofolio despite the fact that the price is droping and you are losing money;

HODL=Long ago, someone on a bitcoin forum got drunk and made a post with this typo in the place of ‘hold’. A meme was born. https://bitcointalk.org/index.php?topic=375643.0;

lambo= what we’re all going to buy when we’re rich;

TX = A transaction number. This allows you to track a transaction. If you are freaking out because your transaction is taking too long, you probably just have to wait longer. Try tracking the TX.

PoS =A proof-of-stake system (Pos). It is where mining is done by those who hold coins. The result is a bit like getting paid interest for holding coins;

PoW = A proof-of-work system (PoW). It is where mining is done by those who have the hash power, time, and energy. The result is that time and energy is traded for rewards;

Some of the explanations are from here: https://cryptominded.com/glossary-crypt ... need-know/ and from here https://cryptocurrencyfacts.com/a-quick ... ncy-terms/
Last edited by sturmovikul on Tue May 01, 2018 7:30 pm, edited 1 time in total.
Nihil Sine Deo